Construction is underway at Buckinghamshire Thames Valley Local Enterprise Partnership’s Enterprise Zone at Westcott Venture Park, to create a new facility for Reaction Engines to test its revolutionary Synergetic Air‐Breathing Rocket Engine (SABRE), which is designed to unlock the future of space travel and hypersonic flight. 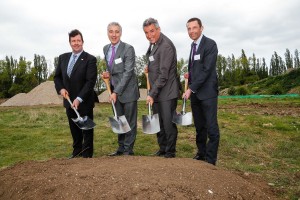 Owner, Rockspring Property Investment Managers LLP (“Rockspring”), is developing six acres of the 650-acre site, which is between Bicester and Aylesbury for a new test facility and assembly building for Reaction Engines Limited. This is the first milestone in a two-year development pipeline which will enable tests of the core of the revolutionary air-breathing rocket engine to begin in 2020.

Reaction Engines is a privately held company based in Culham, Oxfordshire with a subsidiary office in Colorado, USA and employs more than 100 people.  It was formed in 1989 to design and develop a new class of innovative hypersonic and space-access propulsion system – the Synergetic Air-Breathing Rocket Engine (SABRE).

A ground breaking ceremony took place on 4 May to mark the start of construction.  In attendance were Reaction Engines, its partner BAE Systems, and members of the UK and European Space agencies.  World leaders in space technology, which are also based at Westcott Venture Park joined the day’s events including: Moog, Airborne Engineering, SSTL, The Falcon Project and European Astrotech, along with members of the Westcott Venture Park management team and owners Rockspring Property Investment Managers LLP.

Andrew M. Smith, Chairman of Buckinghamshire Thames Valley Local Enterprise Partnership, said: “We are delighted with the decision by Reaction Engines to choose one of our Enterprise Zones as the base for their SABRE air breathing rocket engine facility, and to celebrate this at today’s ground breaking event.”

Andrew added: “This investment at Westcott Venture Park will not only help facilitate growth in the Buckinghamshire economy but also further establish Buckinghamshire as a global centre of excellence in space technology testing – building on the recent decision to establish the National Propulsion Test Facility at Westcott.

“The Westcott site’s heritage in space propulsion technologies is the ideal platform to develop this sector at the site, which is one of three locations in Aylesbury Vale where Buckinghamshire Thames Valley Local Enterprise Partnership (BTVLEP) have secured Enterprise Zone status. In addition, with the UK Space agency, BTVLEP are looking to develop the research capacity at the site, including a Satellite Application Catapult and a 5G Innovation test facility, which together will help support a growing number of new jobs and business investment opportunities to the Buckinghamshire area.”

Rod Mordey, Associate Partner at Rockspring says: “Reaction Engines has developed technologies that are truly cutting edge and we are delighted to be creating this new facility, which will support the future growth of the company. These works are a major step forward in the evolution of Westcott Venture Park and will further establish the park as the leading UK hub for space propulsion and centre of excellence in space technology testing.”

Mark Thomas, Managing Director, Reaction Engines Limited said: “Our new test facility and assembly building represents an important landmark for Reaction Engines as we transition from a research phase into the development and testing of the SABRE Engine.

“Westcott provides us with an excellent venue for our test facility, close to our headquarters and at the centre of an emerging space technology cluster. The provision of an assembly building on the site will enhance our ability to test different configurations and components meaning that we can swiftly move forward with the development of the SABRE engine.”

Westcott Venture Park is now home to 76 businesses and provides employment space for more than 600 people and is managed by Lambert Smith Hampton.