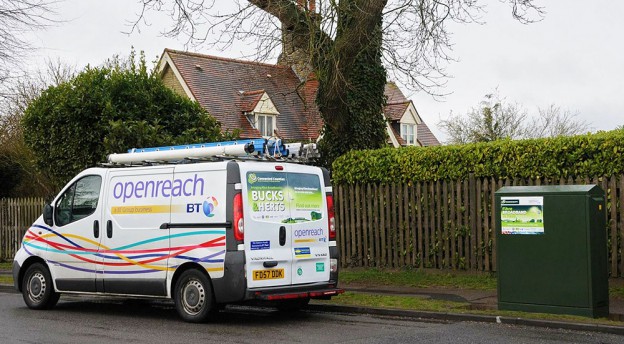 The push to get additional high speed fibre broadband into Buckinghamshire has reached three quarters of its target in little more than two years.

Work started on the Connected Counties programme which is being managed by Bucks Business First in Autumn 2013, and this month the 150th green roadside cabinet went live, making fibre broadband connections available to order for an additional 35,282 Buckinghamshire residents and businesses as part of the £18.06 million project.

BTVLEP Chief Executive Richard Harrington welcomed the news but said there was more work to do to ensure superfast broadband coverage is available to all.

“Many of our Buckinghamshire businesses are in rural communities that had limited high speed fibre broadband until now,” said Richard “Whilst this is good news for businesses and residents who might otherwise have been stuck in a digital backwater, we must keep the fibre cables rolling out”.

The latest census figures showed that the Buckinghamshire LEP area had second highest proportion of homeworkers in the country with 16.5% of people regularly working from home. Technological advances and lifestyle changes in recent years mean that this figure continues to rise .

David Sargent from Wendover, who oversees a team of project managers and who regularly works from home is typical of this trend. “I work from home a couple of days a week where I am regularly on high definition video calls using Cisco’s WEBEX, sharing documents and sending large files, the new superfast connection has had a massive impact on my work and my productivity. I wouldn’t have been able to do this effectively without fibre” He added, “It has also made home life much nicer as well, before the kids would be watching Netflix and the picture would buffer, but not with fibre broadband, so the kids are happier, all our computers seem to work quicker as well.”

Another Buckinghamshire resident who is pleased he chose to upgrade to faster fibre broadband, is community news website Editor Keith Milmer. The retired management development consultant, who lives in Haddenham, updates his popular news site daily. ‘A lot of my time used to be taken with uploading images from local events,’ said Keith. ‘Now it’s instantaneous. For me it’s the sheer pleasure of getting stuff online at a much quicker rate, and to have two or three people online at the same time, there’s no impact on speed.‘

A second phase of the programme which aims to take coverage in the county beyond 95% by 2017 has recently been approved by the BTVLEP Board who along with the district authorities in Aylesbury Vale, Wycombe and Chiltern are investing a further £2million and unlocking a further £2m Government digital investment for Buckinghamshire.

The latest areas in Buckinghamshire to be connected under the project included neighbourhoods in Aylesbury’s Gatehouse area, Marlow, Wrexham, and Lillingstone Dayrell.

In the next few months, new high speed fibre broadband roadside cabinets are scheduled to go live in Burnham, Winslow, and Eaton Bray.

Culture Secretary John Whittingdale said “Reaching three million properties is a huge achievement. Our rollout of superfast broadband is transforming lives up and down the country as every day thousands more homes and businesses are gaining access to superfast speeds. The levels of people taking up superfast broadband in areas where we invested public money are beyond our expectations, and BT is now reimbursing the public purse to deliver further coverage across the UK. This now means that BT will be providing up to £129m cashback for some of the most hard to reach areas”.

Dave Hughes, BT’s regional director for the East of England, said: “Today marks important milestones, both locally and nationally, for the superfast broadband revolution. This exciting technology is transforming the opportunities for communities across Buckinghamshire and the UK as a whole.

“BT’s multi billion pound investment in superfast broadband through its involvement in partnerships, such as Connected Counties and its own commercial programme has already made fibre broadband available to thousands of households and businesses in Buckinghamshire and is  growing rapidly.”

To keep up to date on progress of the Connected Counties project please look at the ‘rollout update’ section at http://www.connectedcounties.org/home